ROME, March 24 (Reuters). The death toll from an outbreak of coronavirus in Italy has grown by 743 to 6,820, the head of the Civil Protection Agency said on Tuesday, reversing a decline in fatalities seen over the last two days.

On Monday 602 people died. That followed 650 deaths on Sunday and 793 on Saturday — the highest daily figure since the contagion came to light on Feb. 21.

The total number of confirmed cases in Italy rose to 69,176 from a previous 63,927, an increase of 8.2%, in line with Monday’s growth rate. Of those originally infected nationwide, 8,326 had fully recovered on Tuesday. There were 3,396 people in intensive care against a previous 3,204.

The hardest-hit northern region of Lombardy remained in a critical situation, with a total of 4,178 deaths and 30,703 cases. That compared with 3,776 deaths and 28,761 cases reported up to Monday. 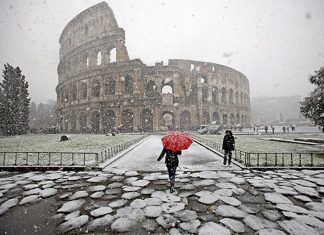 April 5, 2018
Planning to visit Italy during the winter? Italian winters are filled with breathtaking panoramas. There are always new things to experience!