Hundreds of dead birds were found on the streets of Rome, Italy, on Friday, with fears that New Year’s Eve fireworks were to blame.

A video shows birds lying on the ground of the Italian capitals Via Cavour, which is near the busy Termini train station. The Italian driver who captured the footage on his phone referring to the scene as ‘an embarrassing thing, a sad, incredible thing’. While the cause of death of the birds – which were mostly starlings – has not been confirmed, animal rights groups say the ‘massacre’ appeared to be related to a loud display of firecrackers and fireworks in the leafy neighborhood that many birds use to nest.

The Italian branch of the International Organization for the Protection of Animals (OIPA) has called for a ban on selling firecrackers and fireworks for personal use, arguing they pose a threat to animals. 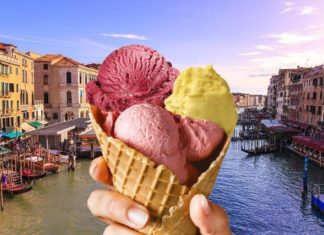 October 5, 2018
At the Carpigiani Gelato University near the beautiful City of Bologna, Italy you can take a 4-week course to become a "Master Gelatiere."