The visual puzzle challenges you to find the “hidden tiger” in the jungle scene – and it’s harder than you think.

That’s because the artwork contains not one but two big cats, with one much easier to identify than the other.
Alongside the fairly obvious striped predator in the middle, rather than a second tiger, the image contains the text “the hidden tiger”. It’s this text that you’re tasked with finding in order to solve the fiendishly difficult puzzle. The optical illusion has been around for years and regularly resurfaces on websites such as Reddit.

It’s also a popular test to send to friends on chat apps such as WhatsApp and Facebook Messenger. However, those looking for a clue should pay closer attention to the tiger itself. The text is actually hidden in the tiger’s fur disguised as the creature’s iconic black stripes. 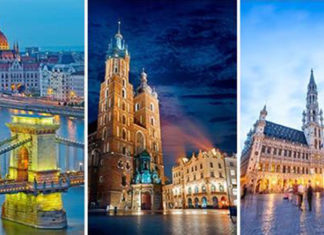 October 17, 2018
From Brussels to Belgrade, these unique and beautiful European City Destinations deliver a memorable experience without breaking the bank...