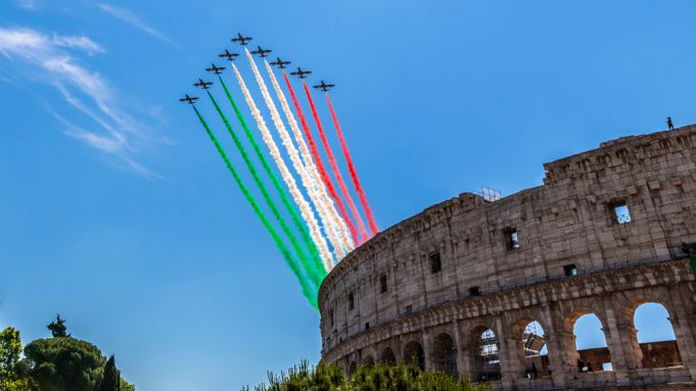 Italy’s Frecce Tricolori fighter jets are conducting a nationwide tour ahead of the 74th anniversary of the nation’s proclamation as a republic on 2 June.

The tour, which began on 25 May with Trento, Codogno, Milan, Turin, and Aosta, will fly over all the Italian regions over the coming days, culminating in an aerobatic display in Rome on 2 June, Festa Della Repubblica.

To celebrate Italy’s national day the jets will fly over the capital as Italy’s president Sergio Mattarella places a wreath at the Altare della Patria in the center of Rome. The tour, which sees the jets emit plumes of the green, white and red of the Italian tricolor, is designed as a symbolic embrace of all regions during the coronavirus emergency in a sign of “unity, solidarity, and recovery.”

The tour continues on 26 May flying over Genova, Florence, Perugia and L’Aquila; on 27 May with Cagliari and Palermo; 28 May with Catanzaro, Bari, Potenza, Naples and Campobasso; and 29 May with Loreto, Ancona, Bologna, Venezia, and Trieste. The flyover in Rome on 2 June comes as Italy canceled the annual military parade in the capital due to the COVID-19 emergency.