The body of a 67-year-old man was recovered in a citrus grove, far from where he was last seen after his car got hit by rising waters and mud, southwest of the Sicilian city of Catania. His wife is still missing.

Italian weather site Ilmeteo.it said parts of Sicily and the adjacent toe of Italy, Calabria, were being pounded by a rare Mediterranean hurricane, known as a Medicane, with winds expected to gust up to 120 km/ph. The farmers’ association in Sicily said in a statement that more than 300 mm (11.8 inches) of rain fell near Catania in just a few hours – nearly half the average annual rainfall on the Mediterranean island.

The Civil Protection emergency relief body issued its highest red alert for the northern tip of Sicily and southern Calabria, warning of the potential risk to life and damage to property in those areas. Schools were closed in a number of towns and cities, dozens of flights were diverted from the area, and ferry links between the southern islands were canceled. 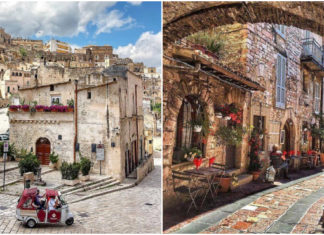 August 11, 2018
When visiting Italy, most travelers make a beeline for famous cities like ... pretty sweep of red-tiled rooftops, bell towers, and ancient spires ...