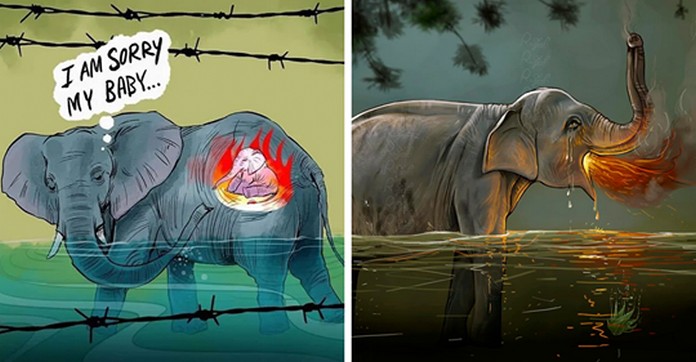 Wildlife officers reported that a pregnant elephant had died after biting a booby trapped pineapple filled with firecrackers.

After the elephant took a bite, the improvised explosive exploded in her mouth, damaging her jaw, and even the locals tried to save her, it didn’t survive. Local use booby trapping food in order to keep animals away from the fields.

Forest officer Mohan Krishnan shared this heartbreaking story on Facebook and said the elephant was know for trusting people. “When the pineapple she ate exploded, she must have been shocked not thinking about herself, but about the child she was going to give birth to in 18 to 20 months,”.

Mr. Krishnan said that even though the elephant was badly injured and ran in pain through the village streets, she didn’t crush a single home.

She eventually got to the Velliyar River where she stood with her head partially underwater. Two captive elephants tried to lead her out of the river but the elephant didn’t move, eventually succumbing to her wounds in the water.

June 2, 2018
Start planning your tropical getaway - These are the best beaches with the clearest waters in the World, according to Condé Nast Traveler readers!