A mediterranean Cyclone – is on course to strike Italy in the next 24 hours as parts of the country are warned of torrential rainfall and intense levels of rain.

The Hurricane is rotating over the southern Mediterranean and producing an extreme amount of rainfall across eastern Sicily, Calabria and Puglia regions.

Models show the storm is a small but deep cyclone which was travelling north of Sicily on Friday morning and will intensify throughout the day while moving north. These maps show the intensity of the storm and show the cyclone travelling north from the Tyrrhenian Sea towards the coast of Tuscany on Saturday. 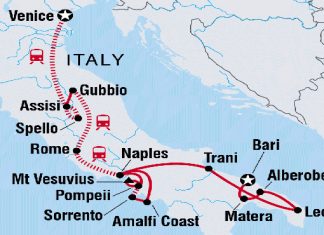