A mediterranean Cyclone – is on course to strike Italy & Greece in the next 24 hours as parts of the country are warned of torrential rainfall and intense winds.

The storm, often called a “Medicane” (Mediterranean + hurricane) has many features similar to tropical hurricanes and typhoons.

Models show the storm is a small but deep cyclone which was travelling north of Sicily and will intensify throughout the day while moving north. These powerful storms usually happen during the months of September and October, when sea surface temperatures in the Mediterranean are still quite warm.

The rainfall will be focused across eastern Sardinia, Sicily as well as over Calabria and Puglia regions – more than seven inches will be possibleg. The area most under threat are the Ionian islands on Greece’s western coast where the Hellenic National Meterological Office has put out a severe warning.

The system is expected to move slowly over eastern Greece on friday before picking up speed and heading into Turkey on weekend. 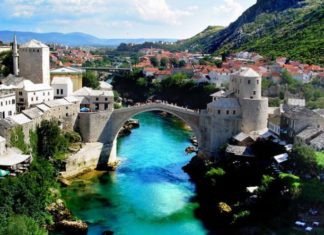 May 2, 2018
Europe is the oldest continent with many medieval cities & villages, which the travelers should not miss. Let us check the best of them!