The oldest barber in the world, Anthony Mancinelli of New York, passed away on Sept. 19 at 108 years old, after 96 years of cutting hair. Mancinelli, who had been healthy most of his life, died after suffering complications from jaw cancer.

Mancinelli started working as a barber in 1923 at the age of 12, four years after he and his family emigrated to America. At that time, Babe Ruth was playing for the Yankees, World Heavyweight Champion Rocky Marciano was born in Brockton, Mass., and Prohibition was just getting underway.

He ran his own business — Anthony’s Barber Shop — for 40 years in Newburgh, N.Y., before switching to Fantastic Cuts in New Windsor. He was a WWII-era veteran, and was married for 69 years until his wife’s death in 2004. He said the secret to longevity was simple: don’t retire.

He made headlines across the world over the last few years, as reporters learned that he still drove and worked full-time at the shop. “They all wonder when I’m going to retire. When the good Lord calls me,’ ” he joked during an interview. Please, raise a glass to Anthony—he will be greatly missed. 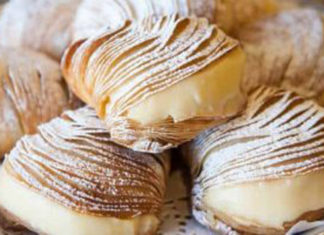 September 15, 2018
Have you ever wondered how this wonderful “Sweet or Dolce” is made?