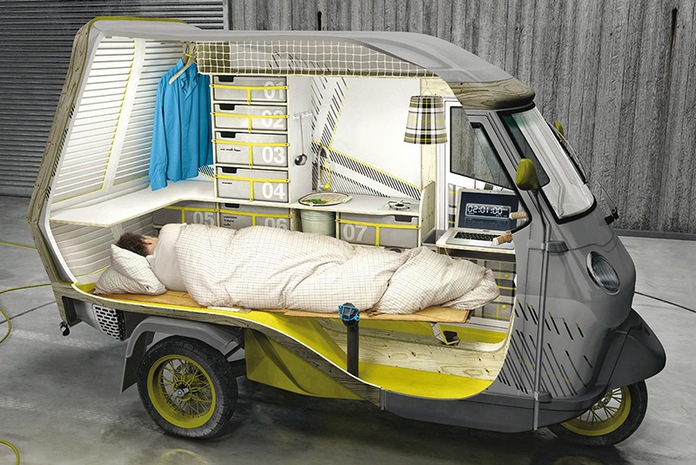 The Piaggio Ape helped post-war Italy climb out of economic despair. Essentially a 3-wheelVespa scooter, the tricycle was prized for its low cost and fuel efficiency, and it is still used for mail delivery and auto-rickshaw builds.

It’s about to hit the camping world, at least in concept. German industrial designer Cornelius Comanns took a modern spin on the Ape with his Bufalino.

Aimed at the solo traveler, the Bufalino is the minimalist camper’s eco dream. Under the shell, the camper is kitted with a fold-out bed, kitchenette, wash basin, storage, water tank, and a mini fridge — all the creature comforts of home but without the trappings.

Sometimes, functionality takes precedence over looking cool. This is the case with the camping scooter concept by Cornelius Comanns, a German designer. It’s not so easy on the eyes, but it’s packed with features.

The camper has a fold-out bed, kitchenette, wash basin, storage, water tank and a mini fridge, all of which fits safely underneath an outer shell that surrounds the scooter. It has a laptop desk, and a seat which pivots to face the kitchenette.

The interior has various yellow and black plaid accents on the doors, dash and in the cabin. It’s a beautiful re-purposing of the classic ItalianPiaggio Ape, a motorized tricycle that was prized for its incredibly low cost and high level of fuel efficiency. The little concept wagon isn’t likely to hit the market anytime soon, but we loved the simple thinking, showcasing that good things can come in small packages.